Growing up in Australia, it was difficult to avoid the ocean and I never did. The beach was always the place to go, but as soon as I was old enough, I left the beach and descended into the ocean. I have dived in almost all our world’s oceans and I am still awed by our blue planet.

So, as this summer was ending, it was my honor and privilege to dive at the NOAA supervised Flower Garden Banks National Marine Sanctuary. The Flower Garden Banks received its unusual name from snapper and grouper fishermen in the late 1800s. They named the banks after the brightly colored sponges, plants, and other marine life they could see on the colorful reefs below their boats.

This beautiful sanctuary is one of the region’s best kept secrets. Picture yourself over 100 miles from land, in the middle of the Gulf of Mexico. At times, the seas can be very unforgiving, and the weather can turn foul in an instant. As the top of the reef is 68 feet, it is considered diving for experienced divers. But here, in the midst of this unpredictable Gulf, lie three of the most beautiful and wild places in all the world. Manta rays, whale sharks, coral heads bigger than cars, hundreds of species of fish and invertebrates and so much more marine life all make this spectacular sanctuary their home among the healthiest corals in the western hemisphere.

I would join some of the world’s most accomplished women divers, all members of the Women Divers Hall of Fame, for a very special dive. Every year, in the northern hemisphere, eight days after the full moon in August, all corals and sponges spawn, creating an unimaginable underwater snowstorm. Along with fellow divers and underwater filmmakers I was excited to witness the event. My research friend at the Flower Garden Banks predicted the spawn would take place on Thursday evening at around 9pm. At 8.30pm we suited up and descended onto the top of the reef of the West Flower Garden Bank and we swam carefully aiming our lights at the hard corals. Slowly at first, the eggs began to float away from the huge brain and star corals. It was as if the corals were waiting for one of them to go first because soon all the corals were releasing their precious egg bundles into the water column where hopefully they would find a place on the sea bed to grow.

Each one of us had our own way of showing excitement at 80 feet. It isn’t easy to smile and laugh with a regulator in your mouth, but somehow we managed it! It was a rare privilege to witness the beginning of new ocean life.

For the next few days we made five dives each day and as we swam across some of the healthiest corals we were rewarded with schooling hammerhead sharks, a large tiger shark, silky sharks, several mantas, eagle rays, mackerels, jacks and so many small critters, huge sponges, and so much more. Oil rig platform dives were inspiring and they provided magnificent, if unusual environments for marine life.

We did see areas of coral bleaching which signified warming water temperatures. The positive news is that the coral is still actually alive and if the symbiotic algae called zooxanthellae can reestablish themselves, recovery may be faster than once feared.

It was an incredible dive experience and I knew my group of students at Yorkshire Academy would have many questions for me. My SEEDS (Students Engaging the Environment Through Discovery and Science) are 3rd and 4th grade sponges and they can’t learn enough or quickly enough about our ocean environment especially our own Flower Garden Banks. These students are fast becoming experts on the Flower Garden Banks, and they are excited to share their knowledge with their classmates and students at other schools. Just like the corals from my recent dive, my students will grow something immensely precious. 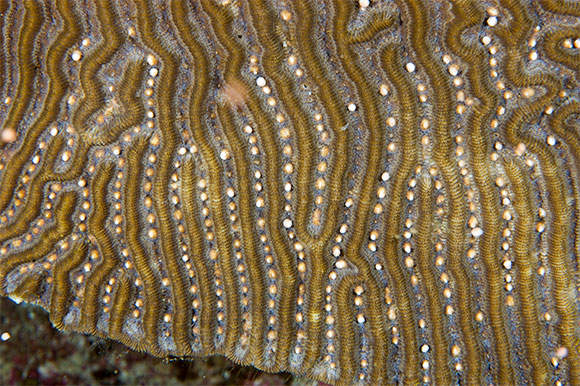 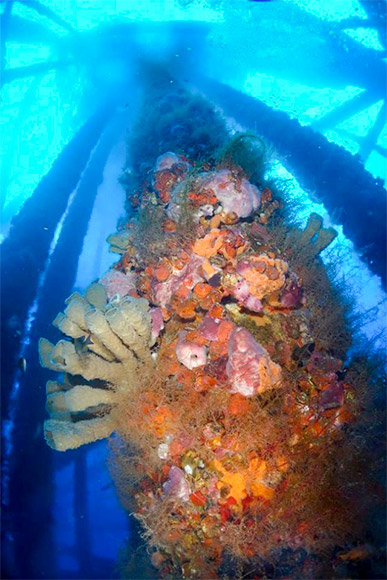 Sponges and corals at home on oil platform legs.