Growing up in a musical family, I had no choice other than having a deeply rooted love for music. I started young and have never looked back! We were somewhat of an American-style Family Von Trapp. I’m the youngest of four, and the only daughter. My dad handed each of us a ukulele when we were old enough to hold it properly, usually about age four. Strangely enough, my first song was “Little Brown Jug.” When I was old enough to realize what the song was about, I chuckled at my daddy’s humor in teaching me such a song at a ripe wee age and parading me all over to sing for family and friends! Needless to say, my own children’s first song on the uke was “Jesus Loves Me!” 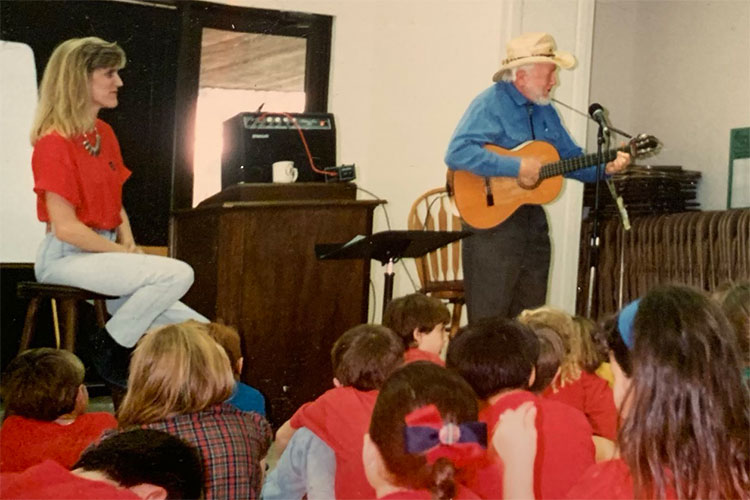 My dad and I presenting a rodeo unit for Yorkshire Academy students. 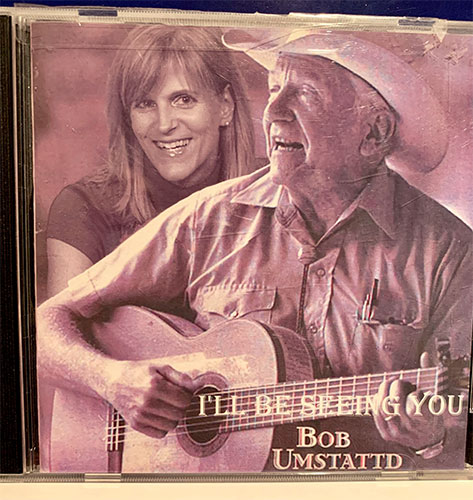 Cover for our CD project.

On the weekends and especially at Christmas, my dad would gather us around in a circle. Everyone had a guitar, or ukulele, depending upon development. My dad knew hundreds of songs, and he knew every verse to every song. We learned as many as we could and would make requests. My favorites were: “Little Brown Jug,” “The Purple People Eater,” and “Jamaica Farewell.” I dreamed I was the little dancing girl who was bid goodbye in Jamaica Farewell. The lyrics are, “I had to leave a little girl in Kingston town.” Funny how the innocence of a child can glean the sweeter story from a song! My dad’s repertoire ranged from Bob Wills to American and regional folk to flamenco. Today when my brothers and I and our children and grandchildren gather to sing my dad’s songs, it takes all of us and the internet to remember every verse!

An anesthesiologist by day, my father, “Dr. UM,” apparently sang his patients to sleep! I have heard from his staff the favorite tune was “Happy Trails.” He was a favorite character around the hospital and clinics, and he actually pioneered Bailey Square Surgical Center, the first outpatient clinic system in Austin Texas. He was the one who made you laugh by his eccentricities. In the 1970s, he was one of the first physicians to wear jogging shoes in the O.R. He also had Lucchese monogrammed ostrich boots which he did not like to cover up with the O.R. covers! He sang in the doctor’s lounge, often making the long hours more bearable for his fellow clinical staff. When he finally arrived home after a long stretch at work, I’d find him on the couch plucking a difficult flamenco instrumental song. It was the way he worked out the complexities of his day. From this, I learned how to work out life on the keys, the strings, or with my voice. In turn, my own children learned to work out complex physics and calculus problems by stepping away from the problem and working it out by playing a Brahms concerto or a jazz improvisation.

When my dad retired from anesthesiology, he became the requested guitarist for many events, the favorite being trail riders’ campfires en route to the Houston Livestock and Rodeo. It was at these events that one of my brothers got the idea to record my father. My brother also recorded my dad at the house in a home recording studio (aka the living room). My mom then made CDs of these recordings, and they became favorite gifts to special friends including Rotarians around the world. Not only was music recorded, but also lengthy recitations of poetry and prose. The man had a beautiful mind.

My dad has since passed away but left a legacy of music to his children and grandchildren. Funny, even great grandchildren having never met him have his gift of music through recorded media, both audio and visual. His musical gift is kept alive at every Umstattd clan family gathering. The guitars are passed around, and we sing our favorites, usually in two or three-part harmony, and I am certain there is joy in heaven. After my dad died, my mom asked my brothers and me which of my dad’s many guitars we wanted. “Madelaine, don’t you want this beautiful exquisite South American guitar that’s never been played?” Of course, I did not! I wanted the one my dad played every day. The one which comforted him after a long stint in the O.R. The one that was beat up, covered with playlists and stickers which have since fallen off, and mellowed with the oil from his hands. I wanted “Dadums’s” guitar. It is this guitar that I use in my music classes at Yorkshire Academy. It is an opportunity for me to share the deeply profound impact music has had on my heart and in my life. You can bet the students share a tear and hear many a story about my dad.

One of the dearest projects I have ever created was a CD we recorded 10 years ago for my mother’s 80th birthday. It all started when my mom was playing one of my dad’s recordings. I began to sing along in harmony, and my mother did not know it was me. Startled, she said, “Who is that WOMAN singing along with your father?” It’s this statement that gave my husband an idea. Why not take my dad’s music and make a recording with it, sort of ala Natalie King Cole with her father, and that we did. While cooking and listening to one of my dad’s CDs one evening, my husband and I began singing and brainstorming for the project, and in the middle of the oyster fish sauce, he began to sing a third part harmony. So, on my childhood favorite song, “Jamaica Farewell” as well as “The Fox Song” and “Waltzing Matilda” there are three voices singing: my father, Jim, and me. It is these songs which I use each year in my music curriculum to teach harmony, American folk, and regional folk to my music students at Yorkshire Academy. Even with iPhone recording devices readily at their fingertips, the students are awed that my voice is actually on a CD recording!

The leader of the band is tired, and his eyes are growing old

But his blood runs through my instrument, and his song is in my soul

My life has been a poor attempt to imitate the man